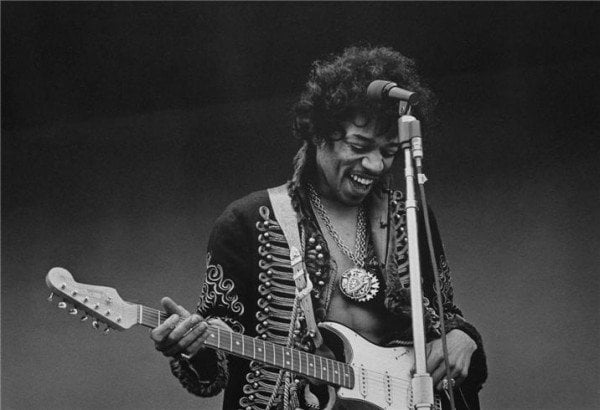 “This shot of Jimi was taken during a sound check at the Monterey Pop Festival, 1967. Hendrix was playing to an empty arena, or more accurately, to himself. I was one of the official photographers and, for some reason, everyone was at dinner except Al Kooper, Jimi’s band and crew, and some of the other stage-hands. I approached Jimi and told him my name was Jim Marshall, that I was one of the photographers. He made some comment like, ‘Far out, man, maybe this shit is supposed to be,’ and I asked what he meant. He said that the dude who made his amps was named Jim Marshall, and smart ass me says, ‘yeah, I know that.’ But then he said, ‘What you don’t know is that my middle name is Marshall.’ We were all pretty stoned (the amp Marshall wasn’t there), but there were three Marshalls onstage at once.”