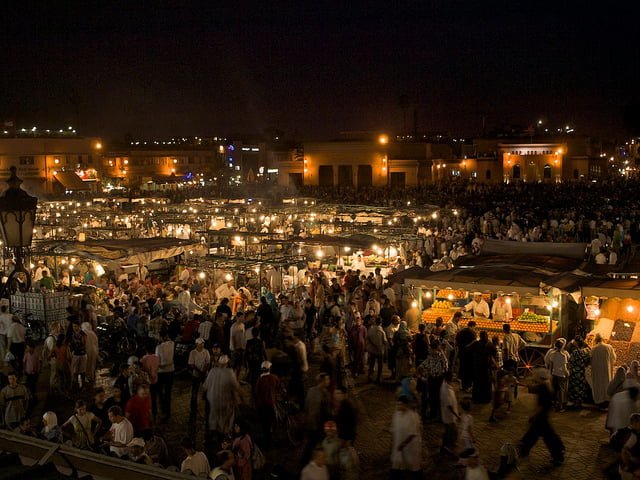 This picture sooo takes me back. I spent one Christmas, in the seventies, four of us crammed into a Renault 4 – camping, travelling around Morocco. We visited Casablanca, Rabat, Fez and Marrakech. In all these places the original sites are preserved in walled, self contained enclosures, called Medinas. This meant you could move from the density of modern cities, with all its trappings, into an ancient and historic world with houses built from clay, narrow passage-ways, open drains, bazaars, in a heart beat. The transformation was instant.
The most memorable of these cities for me was Marrakech. It’s the furthest south and sits near enough to the Sahara desert for day trips. The camp site there was a gathering place for travellers to group and form a convoy to cross the desert. Even in the eighties I knew people that purchased old luxury cars in the UK (Mercedes were popular to use as taxis), took them to Marrakech, joined a convoy and sold the car the other side for much more than the original price. This covered the adventure down and the plane fare back. That market has long gone I should imagine.
The square in the picture was practically empty during the day, only coming alive when the temperature dropped at night. Tourists were few at that time of year but the food vendors, snake charmers, acrobats and story tellers always drew a large crowd.
I wonder if the story tellers are still there. It was a privilege to watch them in action even if I couldn’t understand a word they said.

My camera was stolen in Spain – the day before I flew back to the UK – so all record of this trip was lost. When I see pictures like this it all comes flooding back.